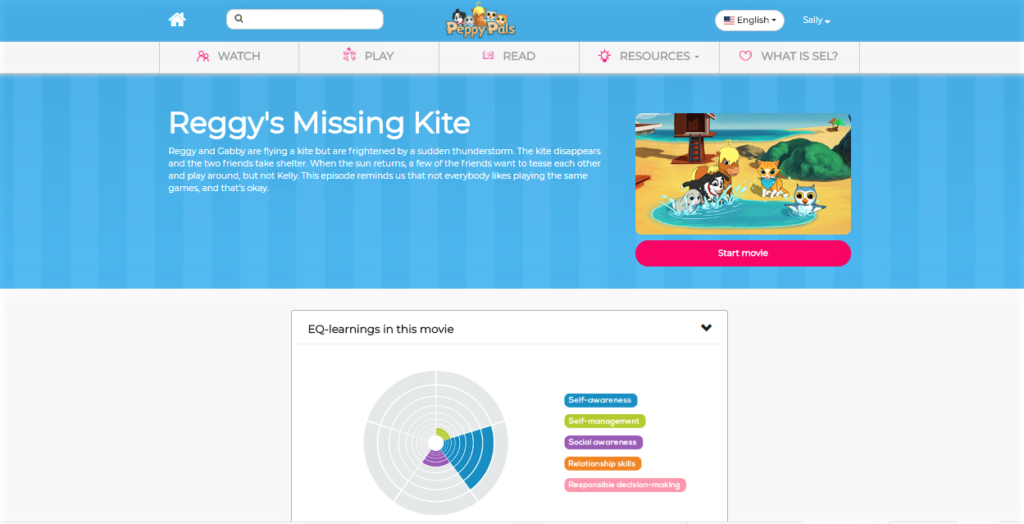 A 360 degree Approach to Measuring SEL in Early Childhood Products

With a growing industry of game-based learning solutions for early childhood education, a call for educational technology (EdTech) solutions with Social and Emotional Learning (SEL) focus has arised. However, SEL is a concept with a connotation of being “fluffy” and “difficult to measure”.  Despite extensive review (Goodman, Joshi, Nasim & Tyler, 2015) on the many benefits of teaching young children SEL, all studies are observational, and causality is not established (it has not been experimentally tested). Hence, EdTechs with a SEL focus face the challenge of finding a balance between meeting the child on their level, engaging and educating them, while at the same time producing a valid product for sparking conversations on SEL between children and adults.

To take on this challenge, start with engaging young children in their digital world by gamifying the product. This entails a visually entertaining  product with a wide content for children to explore. Some examples of EdTech companies teaching SEL in a digital form are Peekapak and Class dojo, offering e-books based on storytelling. Another example is the pioneers’ of gamifying SEL, Peppy Pals’, with their SEL-platform that includes, among other things, video-scenarios of varying social situations and quality animations to clearly capture emotions. Making sure children’s SEL is affected, Peppy Pals ran a study on human-computer interactions (Waern, 2014), finding that children mimic emotions displayed by the language-free characters, even after the game.

Secondly, earlier research suggests (Rasmussen et al., 2016) simply watching SEL-focused videos/scenarios are not necessarily significantly effective on their own. They suggest that what makes them effective in teaching SEL are parents and educators. Adults need to simply talk about the social issues in the games/videos for them to have a significant effect on children’s SEL development. One way of describing the process/conditions needed to reach this desired outcome could be to develop a step-by-step “theory of change concept” (TOC). To clarify, here is an example of Peppy Pals’ TOC. Peppy Pals SEL-platform (1) provides children with an array of storytelling scenarios using quality animations, (2) and gender-neutral characters with unique personalities, creating engagement and relatability. These are found in (3) a digital platform for children, parents and educators to explore social situations on neutral grounds, using conversation starters and role-play activities. Thus (4) supporting adults in starting conversations on SEL and helping children associate and implement the scenarios and SEL-knowledge in real-life.

Your product is engaging, children love it. How do you get adults to buy into it?

Working with other practitioners and researchers, I have discovered that possibly the ultimate way of making an impactful product valid and trustworthy is with a 360 degree framework of measurement and research support. But first, and foremost, dig into your target group and ask what they lack and need. Adapt your products thereafter. Peppy Pals asked schools and parents, who replied that what they need are flexible and digital, but structured tools for teaching SEL (teachers); and conversation starters: a bridge on how to speak to their children about SEL (parents).

A next step is to combine the demands of the target group with research studies and methods. A concrete example is Peppy Pals’ use of  the Collaborative for Academic, Social and Emotional Learning’s (CASEL’s) SEL-model. A standardised SEL-model working as a fundamental categoriser in Peppy Pals’ SEL-platform, helping children and adults differentiate between the videos’ focal areas. For example, if teachers struggle with alienation among a group of girls in class, a Peppy Pals video on empathy and problem-solving under the CASEL category “Responsible decision-making” and “Social awareness” could easily be found. CASEL’s model can and will also be used for further developments of new Peppy Pals video-scenarios.

Finally, ongoing and continuous data collection and measurements are vital for the improvement of EdTech solutions within children’s SEL-education. This (non-exhaustive list) includes collecting:

To provide young children and their adults with well measured and valid SEL products, a holistic 360 degree measurements framework could yield good trustworthiness. Weaving together EdTech and playful entertainment with accumulated measures, previous studies and established theories on SEL has shown to be successful for companies such as Peppy Pals.

What are the benefits and challenges of developing SEL products for early childhood based on research?

Disclaimer: The Assessment Work Group is committed to enabling a rich dialogue on key issues in the field and seeking out diverse perspectives. The views and opinions expressed in this blog are those of the authors and do not necessarily reflect the official policy or position of the Assessment Work Group, CASEL or any of the organizations involved with the work group.